Image is from MyMoneyBlog.com

I came across a website called Willing. It claims to make a simple, free legal will with a few clicks of your mouse. I read reviews here and here to see if it made sense to use. The site came out of the tech start-up incubator Y-Combinator.

The reviews I read seem to agree that it is really easy to use the website and it doesn’t ask for any social security numbers or credit card numbers. They also agree that it will create a simple will. They are not sure how legal it will be after time passes. Like most legal documents, they have to be updated periodically to adhere to laws that may have changed over time.

Prince just died without a will and the money to worked so hard to earn will be distributed among people as the judge sees fit. Since Prince left no will, the judge has no idea what he would have done. You don’t want this to happen to you.

I encourage people to have a legal will (what will happen to your things), a living trust (you will manage your things when you’re gone), and a living will (what will happen to you if you are incapacitated or die). There are attorneys that can set these things up for you, but sometimes the costs are a bit much. If you have few assets (car, house, checking accounts, personal items) and want to make sure that everyone knows what you want to happen after you pass, this might be a great free solution.

Here’s a bit about why Willing was created and how it works:

Willing is divided into two main products. The first is an online tool that helps users create a will or living will (a document that outlines their wishes for end-of-life care) in minutes. The second, which Medina and Dyson are currently fine-tuning, is a platform that lets users find and compare costs for funeral homes and cemeteries.

At the very least, going through the site will help you think about what your family might need to make decisions about. Take it for whirl and let me know what you think.

Financial education speaker and author Shay Olivarria wrote 10 Things College Students Need to Know About Money in 2010. The book has been read by students across the country. Credit unions purchase it to provide young members and scholarship recipients with a concise foundation in personal finance.

This year, Shay is updating the book. A new chart of current student loan rates is included as well as a whole chapter about stocks and bonds. The revised and updated 10 Things College Students Need to Know About Money will be available June 2016.

Shay Olivarria is the most dynamic financial education speaker working today. She speaks at high schools, colleges, and companies across the country. She has written three books on personal finance, including Amazon Best Seller “Money Matters: The Get It Done in 1 Minute Workbook”. Shay has been quoted on Bankrate.com, FoxBusiness.com, NBC Latino and The Credit Union Times, among others. To schedule Shay to speak at your event visit www.BiggerThanYourBlock.com.

If you asked most Americans, I think they would say that they aren’t poor. I think they would say that they are part of the middle class. Many were surprised to find out how much money one has to earn to actually be considered middle class. Take a look at this chart and see where you land. If you want to be more specific, use this calculator from the Pew Research Center to find out how you compare to other families.

Since so many want to believe that they aren’t poor, they are just broke (hello, Dick Gregory) many also have trouble admitting that money struggles are an issue. According to The Atlantic, every year the Federal Reserve Board does a survey about personal finance. This year, this data point stood out:

The Fed asked respondents how they would pay for a $400 emergency. The answer: 47 percent of respondents said that either they would cover the expense by borrowing or selling something, or they would not be able to come up with the $400 at all.

It might surprise some, but it doesn’t surprise me. For years I have been suggesting that having $500 in an emergency account (read Money Matters: The Get It Done in 1 Minute Workbook or 10 Things College Students Need to Know About Money) could be the difference between someone making it and someone going under. Many of the people that think they are middle class could actually be considered the working poor (I wrote about the concept of the working poor here, here and here).

If you are not sure what you would do if you needed to come up with $400 here are some ideas to help you build your emergency fund:

Idea #1 Open a money market account with the goal of having $500 in it within six months. If you deposit $21 per week you’ll reach your goal in no time.

Idea #2 Put $50 per check in an envelope and add another $50 each paycheck. You’ll have $500 saved up in 5 checks (that’s 2.5 months). The challenge with this method is that if your home is broken into or catches on your fire, your money goes with it.

Idea #3 Open a secured credit card. When this happens, sometimes people turn to a payday loan. Instead of that open a secured card with a $500 limit. Once you have your $500, if you don’t trust yourself, send that $500 to a credit card company that will hold it for you and do two things 1) provide you with a credit card with a $500 limit to use in emergencies and 2) hold that $500 cash deposit so you don’t spend it and return it when you close your account.

Obviously, I think the best option is idea #1 but I understand if there are circumstances that make this difficult. Whichever option you choose, start creating a financial cushion now.

* indicates required
Email Address *
First Name *
City *
I am a *

Student
Parent of a student
Youth educator
Adult
Other

A few years ago, I wrote about a new formula for credit scores that includes rent payments. Some like the idea as now renters will a history of 0n-time payments will have their scores increased by continuing to do what they’ve been doing. Some dislike the idea because some renters could be hurt by reporting not-so-on-time payments.

The Credit Builders Alliance (CBA) has done a study to provide more insight.

Hope to see you at the Full S.T.E.A.M. Ahead Conference.

People tend to think that it’s difficult to start with nothing and end up a millionaire, but in actuality it’s not that difficult if you take advantage of the magic of compound interest. Business Insider recreated a chart from a David Bach book to illustrate this point. My only issues are that it assumes a 12% return every year which is a little optimistic and that it focuses on age 65 when the full retirement age for social security has now been raised to 67 to people born after 1960. 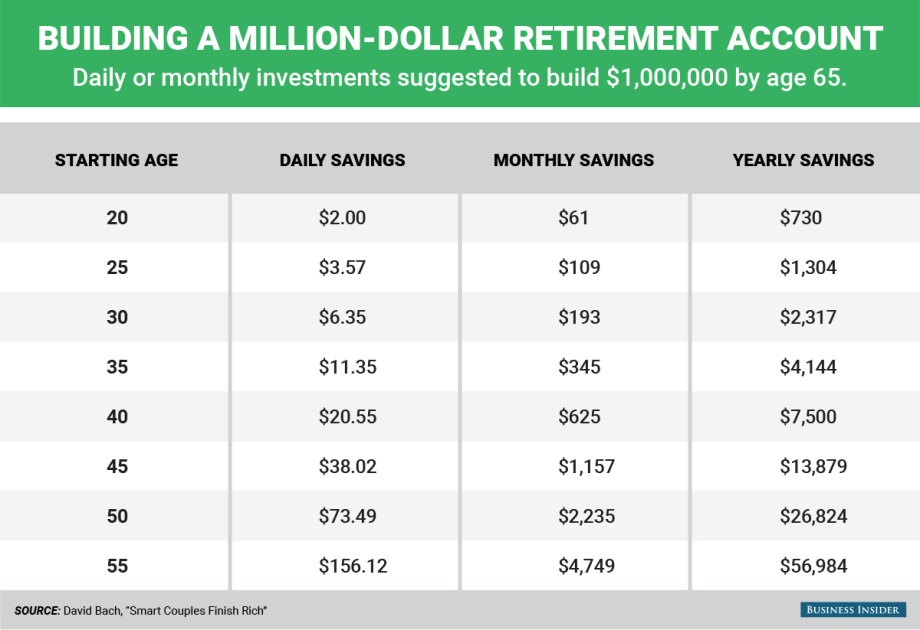 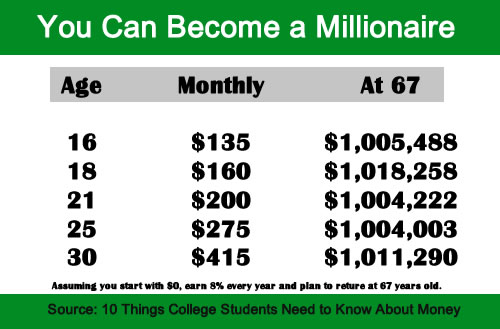 If  you start when you’re younger is takes less money, over more time, to become a millionaire. Regardless of when you start, it’s important that you start. Having something is always better than having nothing.

Financial education speaker and author Shay Olivarria is returning to speak at this year’s Adelante Mujer Latina Conference at Pasadena City College. The engaging workshop Planting a Seed for Wealth will be offered at 11am and 1pm.

This year the workshop will cover:

The conference will be held:

If you’ve never seen Shay in action, check out

I saw this article on BusinessInsider.com and thought it might be helpful to some folks. It outlines five things about the interest rates on your credit cards that you might not know including:

4. Your interest rate can go up for a myriad of reasons.

An increase in the prime rate isn’t the only thing that will make your interest rate go up. “If you become 60 days or more delinquent, you can be charged a penalty interest rate,” says Clements. “That means your rate could become very high on your existing balances.” The bank can also arbitrarily decide to increase everyone’s interest rates. However, in this circumstance, if the bank wants to change the rate on your existing balance, you have the right to say no. “You would then close your card and just make payments on the existing balance until it’s paid in full,” explained Clements. “If you want to keep the credit line open, you would have to keep the higher rate.”

To read the rest of the article, click here.